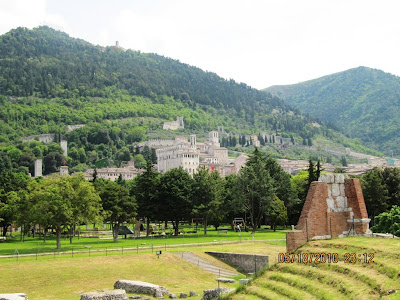 Gubbio, about 45 kilometers southeast of the villa, is another beautiful town with a plethora of history and artifacts that go back to 3rd/4th century B.C. It was built upon the slopes of Mount Ingino. A French writer at the beginning of the last century wrote about Gubbio: "in the stones of the buildings of Gubbio, it seems that the very soul of Medieval Italy is immortalized. I think it's evident the moment your eyes focus on the city walls - and stones.


Gubbio is in Umbria and is about 500 meters above sea level, so you can imagine that there is constant up and down walking. For those with some difficulty walking up the hills, the city has conveniently installed a series of elevators to take you to the top. One elevator takes you to one level, then you have to walk about 25 meters on the cobblestone road to get to the second one, which takes you to the upper level.

There are six doors into the city and I didn't take a clear shot of any of them; ah, well, we'll go back as new guests arrive. Some of you will get a chance to read about the history, but it is believed that more than 300,000 years ago, the caves on Mount Foce (there are three mountain ranges - Foce, Mount Ingino and Mount D'Asciano) were inhabited by "ferocious" homo-erectus, the first to use hand-axes, some of which have been discovered. About 30,000 years ago, the Homo-Sapiens (modern man) arrived, some of whom made homes on the "cyclopean walls" of Mount Foce. see below (click to enlarge). 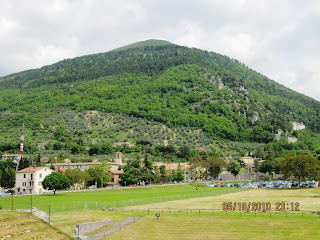 Because Gubbio was such an important base for Umbrian culture, I've decided to break up my notes into various topics: the Eugubine Tablets, The Roman Theater, Ceramics, Art, old fountains and water movement and some street scenes only to show the architecture and construction. There may be others, but I took 168 photos, but I'll spare you the downloading time, but will send a small sampling that correspond to the topics. Gubbio is another of the Italian cities that would delight both the amateur and professional photographer.
Posted by AJ at 12:34 PM