The Eugubine Tablets discovered in 1444 by a farmer who later sold them for two years of grazing rights had no idea how important they would be for historians. Too bad there wasn't a lawyer to advise him, otherwise he might have been a "wealthy" Umbrian. The written material underscores the importance of Gubbio as one, if not the most important political and religious center of ancient Umbria. 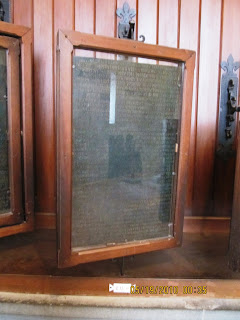 There are seven bronze Tablets, which were purchased from the farmer in 1456, by the Gubbio council. Four of them and part of the fifth were written in the Umbrian alphabet with elements of the Etruscan language (3rd and 2nd century B.C.) The other Tablets were written in Latin. I'm relying on what others have written about the Tablets, but the Tablets explained Gubbio's position within the existing territory and referred to a rock on high (an acropolis), which was a symbol of religiosity.

The population, according to the Tablets, was divided into ten groups called "decuries" all with ethnic names. Each of these divisions was sub-divided into two groups head by a chosen family. Keep in mind readers, that while it was found in 1444, the Tablets go back several hundred years before Christ - the early Roman period and focuses on both religious and political events. It certainly stresses the organizational skills extant, realizing that each family was given specific responsibilities. The focus was on religious matters, but there was a leader referred to as the "Marone" who dealt with social matters. In the religious context, the parallel figure was the "autore."

The Eugubine Tablets describe "ceremonies" that the ancient Umbrians performed in Gubbio including rituals of atonement, purification, sacrifices to counteract evil decuries (I guess if someone was trying to gain more power, they would be considered "evil decuries), ceremonies involving dogs and libations.

The Tablets describe specifically two main ceremonies - Atonement and Purification. The first was a preparatory ritual on Mount Foce where the "augur" gleaned divine messages by the flight of the birds (a seer?). The second ceremony was held further away from the town walls. There were similar rituals, but the outsiders were kept at a distance because those conducting the ritual believed they were specifically chosen by God. Not only did they keep the outsiders away, those chosen by God openly cursed their enemies.

No doubt that historians were ecstatic to have the Tablets in their possession that provided information that described how the Umbrian people developed, prospered and interrelated with Romans and other societies. It was a rare find that shed light on activities in this area of Italy.

Read one on the left first (click to enlarge), which is the "official" explanation of the Tablets. There's more in the next photo. 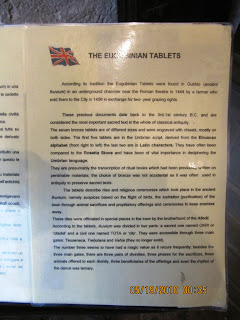 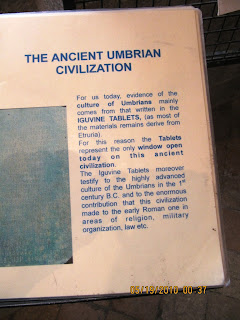