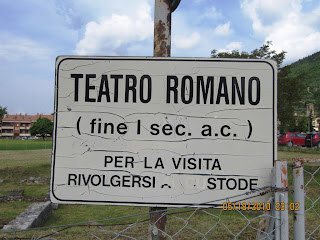 One of the first visible ground  sights you witness entering the historic area of Gubbio is the Roman Theater. It  reminds us of a trip to Sicily a few years ago when on one of our outings to the  east of the city, we came upon Segesta, and rounding a curve, one of the most  amazing sights was the Roman temple, one of the more intact temples in existence.  Unfortunately, the Roman Theatre in Gubbio isn't quite intact.  Vandals have removed some of the material over the hundreds of years, a  happening that occurs in almost every ancient city where rocks have fallen. The  material is often used for building rock fences or even walls of houses.   But, anyway on with the story. 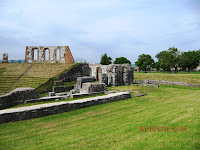 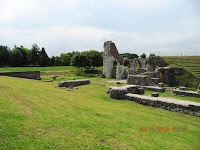 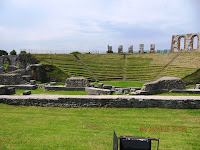 The theater's date of construction is  uncertain, but it was probably not built before 55 and not after 27 B.C.   And, archeologists theorize that it was restored no later than 14 A.D.  In  any case, it's very old. There may have been a Basilica on either end of the  Theater.  An interesting point is that the Theater was built using the  techniques of all Roman construction projects. This Theater is only slightly  smaller than those either in Pompeii or Marcellus in Rome.  It is purported  to have accommodated about 16,000 people, yet when you look at the seating, it's  incredulous to believe that it could have held that many people, but we're  seeing only a fraction of its size.

As the photos will show, it is (and certainly was) a beautiful  Theater. 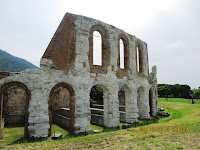 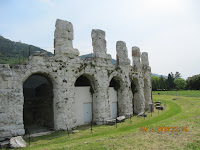 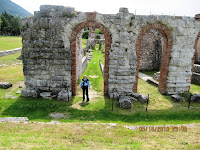 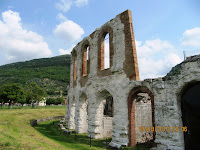 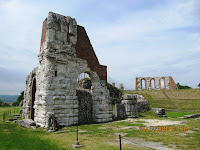 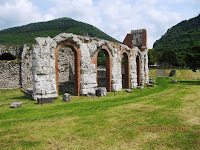