Urbino - The City of Art 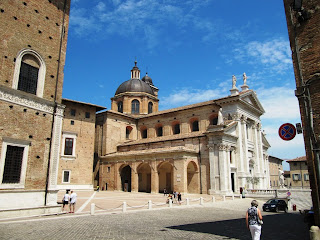 The Duomo in Urbino 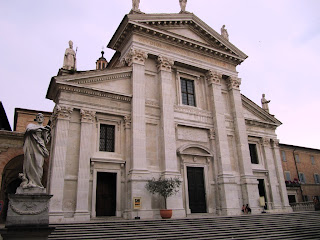 With our dear friends, Jim and Yvonne, we traveled to Urbino, which is located in Le Marche (pron: Lay Mark-ay), a drive which was supposed to be about 79 kilometers, according to the GPS, came out to be 97 kilometers traveled over a twisting and winding road climbing to an altitude exceeding 3,000 feet, before descending into the valley on the other side of the Apennines mountain. We passed the towns of Bocca Trabaria, Borgo Pace and Mercatello before arriving in Urbino. The vistas from on high were fabulous, at least for those who did not fear looking down into the valley we just left. The weather was perfect – sunny and in the 80s. 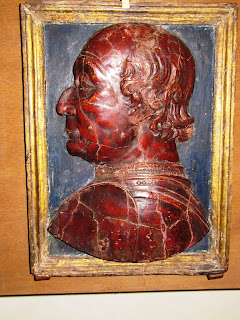 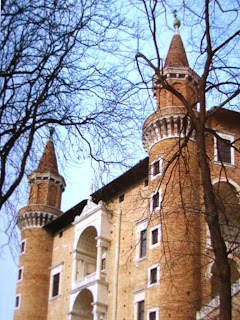 The Duke and his Palace
The recorded history of Urbino dates back to the 3rd Century B.C. As a part of the Papal State, Urbino was in a strategic location during the many battles fought by the church against those challenging their rule. In 1155, Antonio da Montefeltro settled a conflict with Barbarossa in Rome and was awarded the title of Count and Imperial Vicar of Urbino. As the centuries passed, the Montefeltro dynasty gained political prestige and cultivated contacts within the art world.

In 1416, the brothers Lorenzo and Jacopo Salimbeni were hired to paint frescoes on the walls of the Oratory of San Giovanni church where they created an excellent representation of Gothic art. Other artists followed. An interesting sidebar: the death in 1443 of Guidantonio, the reigning leader at the time and a fervent supporter of the arts, caused the control of Urbino to be passed to his 16 year old son, Oddantoni , who was incapable of fulfilling the role his father had performed with wide support from the populace. The result was that an angry crowd pursued him and threw him out the palace window (finestration) along with two of his ministers. The illegitimate son of Guidantonio, Federico, who was born in Gubbio, was summoned to Urbino to appease the people. Federico had a reputation of being wise. Unlike what was expected, he did not organize a vendetta against those who eliminated his half brother, but began building the foundations of a new reign, which resulted in the beginning of a great period for the Court and the people. Through the marriage to Battista Sforza, a marriage that only lasted 12 and a half years, but during the period, Urbino had gone through a significant transformation. The Court became a center point for Renaissance culture, mathematicians, legal experts, architects and painters. Piero della Francesca, a native of nearby San Sepolcro was just one of the important painters that found his way to Urbino. In fact, della Francesca’s Flagellation, which was hung in the Duomo, was moved to the Ducal Palace. 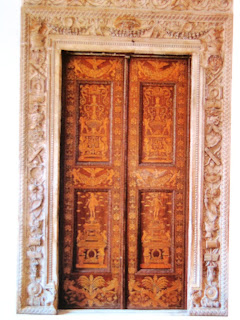 Door of War with inlaid wood carvings by Barocci.


The Ducal Palace is the centerpiece in Urbino and was planned with considerable care over an uneven land. The photos will show some of it beauty. The core of this Palace is the interior with gorgeous doors made of inlaid wood with intricate designs created by some of the famed artists. One door, the Porta della Guerra (Door of War), was the work of Ambrogio Barocci who was very active in the second half of the 1400s. Regrettably, photos were not allowed, but some were secretly taken (maintaining some skills) and are included. 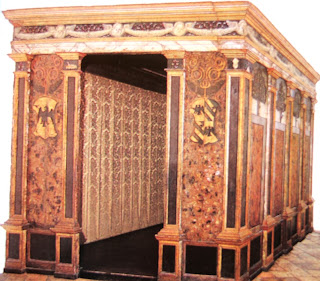 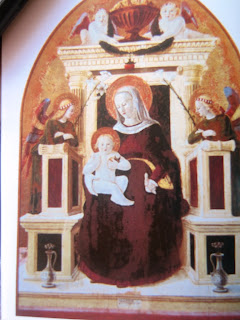 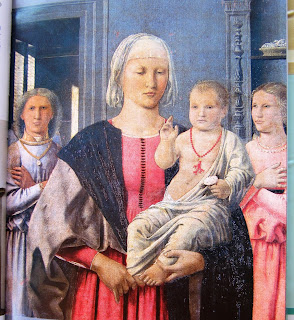 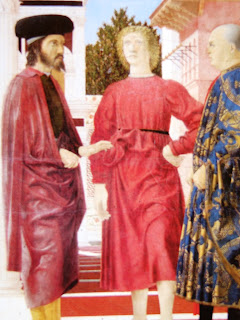 The blond youth portrays the son of Federico Buonconte, who died very young of the plague. The person on his left is purportedly Cardinal Bessarione who tried to influence the Duke to join the crusade against the Turks. 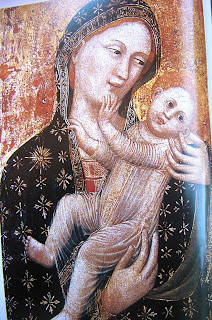 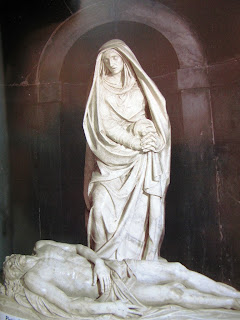 Pieta of the Oratory of the Grotto by Giovanni Maria Bandini 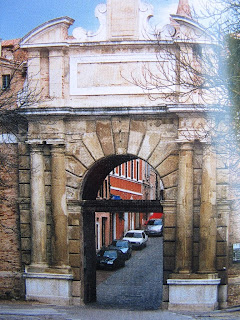 Valbana Gate opens onto the square. It's reported to be the most important gate of the city because it leads to the main street - via Mazzini and because of its scenographic architecture.

For those traveling to Venice from the south should detour to see Urbino. We can only describe the beauty, but to witness it firsthand is precious leaving with you a memory of the skill, ability and creativity of the painters and sculptors of the 15 and 16th centuries.
Posted by AJ at 3:47 AM