Our trip to Orvieto with daughter and son in law was our longest car ride since arriving in Tuscany in May. Orvieto is in Umbria, about 90 kilometers (54 miles) from the Villa, an easy drive on A1 south, but because of the need to use other roads to get to and from the A1, the trip takes nearly 90 minutes.

If you look at Orvieto from A1, you’ll see that it’s truly on a mesa, or as the books say, “a plateau,” constructed on hard rock that dates to the Etruscan era, which developed about 800 BC, 60 meters (about 190 feet) high over the Paglia river valley. It’s a remarkable sight from the A1; the foundation on which the city was built is easily visible. It appears as two distinct layers.

Because of its altitude, the city fathers of modern-day Orvieto have created two effortless means to get to the top: a series of escalators or more directly, the funicolare – a cable car that begins at the Campo della Fiera and ends in the historical area near San Giovanni church. We chose the escalators, hmm, not really, they were the closest to the parking lot. Like many of Italy’s larger cities at this time of year, there were lots of tourists, but not crowded – the shops, stores, cafes; restaurants depend on the tourist trade. One doesn’t have to walk very far along the main street – Via Cavour – to find a wine shop or a deli or one selling merchandize made in or around Orvieto.

The center and most prominent feature of Orvieto is the magnificent Duomo – Cathedral - built in alternating colors of white basalt and a dark green travertine, which gives the church a horizontal black and white look Some, like me, compare it to prison garb. It’s a strange, but massive structure that was built on the remains of an Etruscan temple and also on the site of two churches that were subsequently razed to begin the construction of the cathedral. The building began in 1290 (that’s 720 years ago), but reportedly took 300 years to finish as additions were designed and built. Two of the magnificent additions were: the Chapel of the Corporale and the Chapel of San Brizio. Their importance today are the frescoes that adorn the walls. The tallest spire on the right was not completed until 1503, but in 1795, the spire was hit by lightening and had to be rebuilt. The facade of the building has numerous mosaic designed by a variety of Italian artisans. Many of the mosaics were restored in the 18th and 19th century. 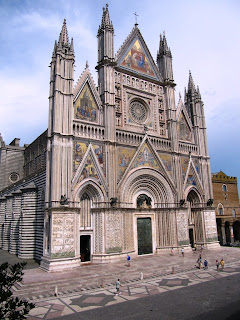 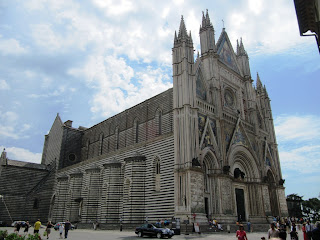 The Chapel of San Brizio is one of the principal attractions. It’s loaded with frescoes painted by Fra Angelico (Guido di Pietro – 1429-1455), a Dominican monk who, despite his death at an early age, left a legacy of beautiful paintings. Other frescoes were painted by Benozzo Gozzoli, a Renaissance painter from Florence and Luca Signorelli, who along with Piero della Francesca introduced “perspective” into their paintings. Photos were not officially allowed, but unofficially there are a few that you’ll see. Fra Angelico painted two frescoes – Christ in Judgment and Angels and Prophets, before he stopped work. It’s not clear why he stopped, but Luca Signorelli, nearly 50 years later, completed the chapel. We do know that Fra Angelico had been called to Rome to complete a project, but what is also known is that he died in Rome. 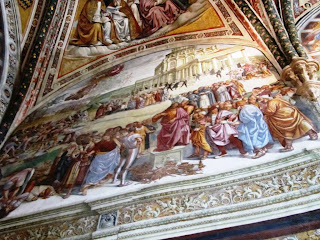 Fresco by Fra Angelico and Signorelli of Preaching of the Antichrist 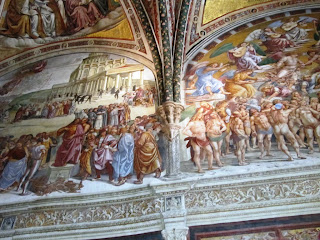 Luca Signorelli's The Elect in Paradise 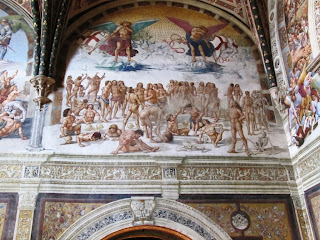 Luca Signorelli's The Resurrection of the Flesh 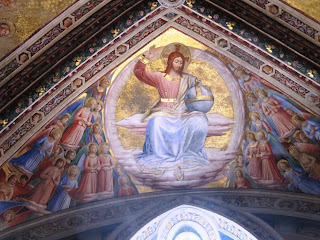 Chris the Judge by Fra Angelico

The other chapel is called the Chapel of the Blessed Corporal. When the Cathedral was built it was intended to be the repository of the bloodstained cloth from the Mass of Bolsena. It was transferred in 1263; a year later, Pope Urban IV declared the feast day of Corpus Christi from Orvieto. The bloody cloth was the focus of worship and is encased in a two-side reliquary, see photo. It presents scenes from the mass at Bolsena and the life of Christ. It’s a stunning piece of enamel on silver with silver statuettes. 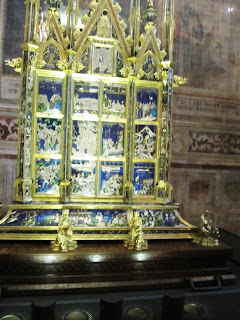 The Reliquary by Ugolino di Vieri (1337-38)
The duomo is the centerpiece of Orvieto and should be visited to see the frescoes painted by some of Italy’s master painters.

The Etruscan Museum nearby has a valued collection of Etruscan art that go back to the Sixth Century BC (more than 2500 years ago). 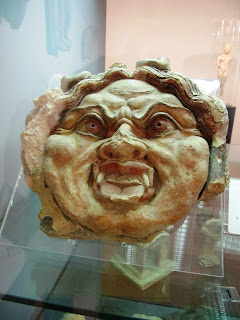 Probably a cast of a real person - Gosh, there hasn't been much of a change. lol! 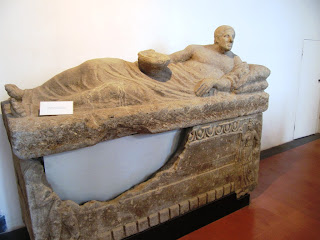 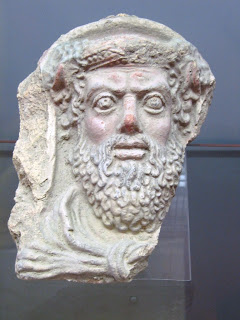 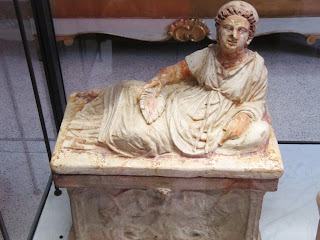 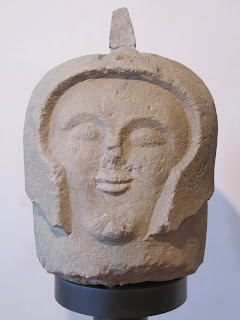 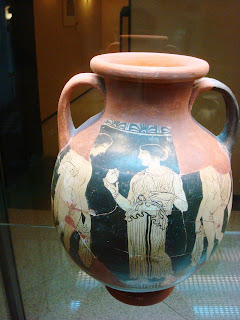 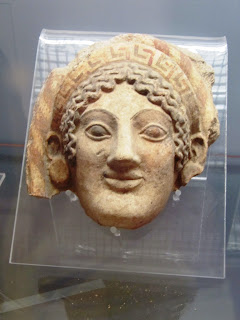 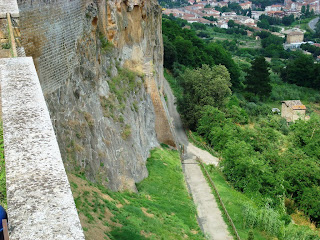 You can see the Etruscan rock base in this photo 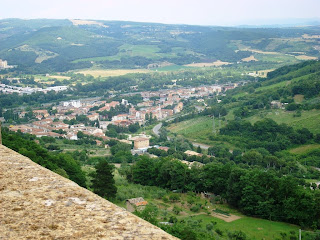