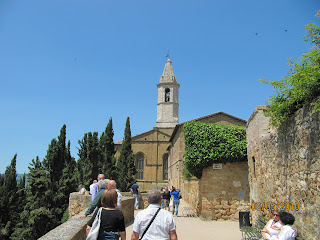 Pienza is about an hour plus drive from the Villa located in the Val d’Orciai. Piensa is situated on a high hill – aren’t they all? West of Montepuliciano and minutes away from Montefollonico, where we had our luncheon feast. (see previous note)
15th Century Cathedral 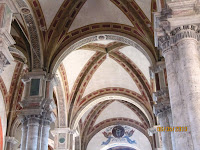 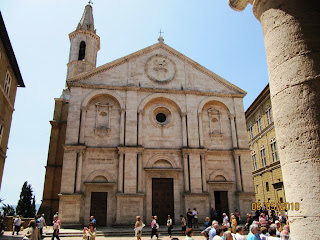 The Cattedrale dell'Assunta, has paintings by the most renowned Sienese artists of the period. Next door to the cathedral is the family residence Palazzo Piccolomino with a loggia overlooking the Val d' Orcia.

The story is that a young boy by the name of Aeneas Sylvius Piccolomini, who was born in 1405 and grew up in this tiny town when it was called Corsignano, later became a known Humanist scholar and philosopher. Oh, yes, among his other credits, he also became Pope Pius II, thus accounting for the name change from Corsignano to Piensa in his honor. Pope Pius II, who was elected pope in 1458, tried to redesign his birthplace into a model Renaissance town – and he wanted to accomplish this in 3 years; alas his dreams were never completely fulfilled. You see, his architect was a crook and embezzled money, but because the Pope was pleased with the completion of the Cathedral and a couple of other buildings, he forgave the architect instead of boiling him in oil. 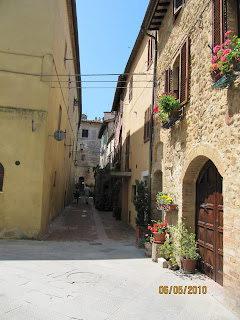 Piensa has been designated as part of the "world-wide heritage of humanity by UNESCO. 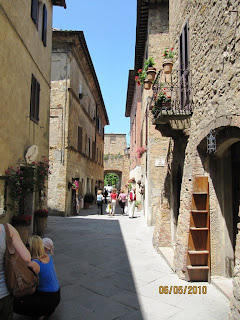 There is only one main street with shops that highlight the town’s main contribution to Italian life – cheese – and great Pecorino made from sheep’s milk.
The town is truly a Christmas card setting with tiny shops, many of them selling cheese products. There’s a passigiata (walkway) that runs along the upper edge of the city offering a wonderful panorama of the countryside. It you travel to Montepuliciano, we encourage you to spend a few minutes, have a cup of coffee and enjoy the ambiance of this charming town. 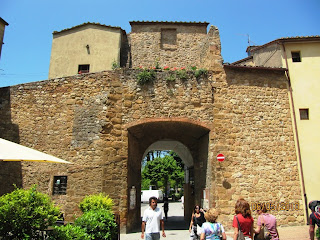