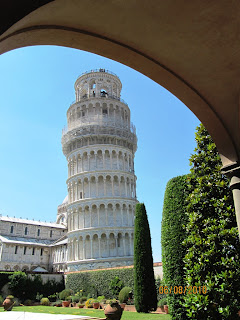 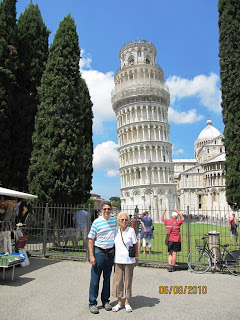 It was 50 years ago that I last visited Pisa. My memory of what I saw then has no relationship to what I/we saw on our trip on 8 June. What I recall from the earlier visit was a Tower that was closed to the public because of it's constant tilting, albeit fractions of an inch per year, the marble dark with years of neglect and less of a crowd in the Piazza.  I have absolutely no recollection of the Duomo (Cathedral) or the Baptistery alongside the Duomo or the Campo Santo (Cemetery).  I wish I had a photo of that period one half century ago to contrast it to what we saw on this visit.
The Leaning Tower (Torre Pendente), the Duomo, the Baptistery and the walls of the Campo Santo have gone through years of restoration and cleaning. The marble on each building is now sparkling white and radiates with a brilliance that we certainly appreciated. 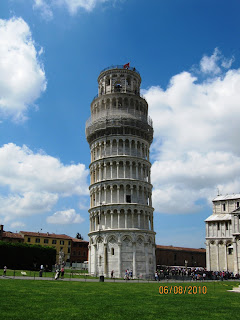 The Tower and Duomo go back to the 12 century, construction began in 1173 and it was completed by 1350, but by the end of 1350, the tower was leaning.4 feet 5 inches off true vertical. By 1817, the tower was now leaning 12 feet 6 inches and by 1993, the tower was at 17 feet 5 inches off of a vertical axis. There was a concerted effort some years ago to abate the continued leaning of the tower, but where it stands now was not in any of our literature. Visitors continue to climb the 350 stairs to the top of the tower - at a hefty price of 15euros ($18) 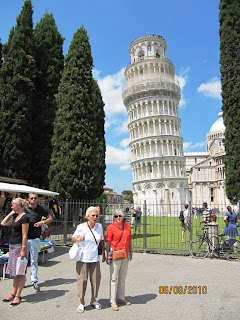 This photo gives you a good view of how much the tower has leaned from the vertical axis. 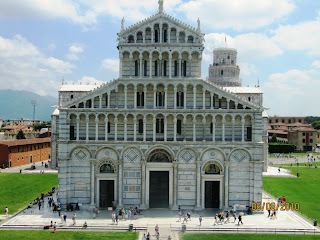 The cathedral is a breathtaking architectural masterpiece. This photo was taken through a window of the of an upper window of the Baptistery. Someone creatively cut a 5 niches square of the metal wires that protect the glass allowing photographers to place their camera lens directly against the glass to get this shot. How convenient and considerate. So, if you happen to be in Pisa, climb the 30-40 stairs to the upper floor of the Baptistery and look for this 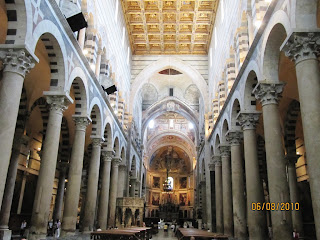 Inside of the Cathedral. Note the Pulpit. Comments follow.
In the early 14th century one of Italy's master carvers, Giovanni Pisano, began what is today one of his major works - the Cathedral Pulpit.  He started in 1302 and finished it in 1311. To put this into perspective, Dante began writing the Divine Comedy in 1302.  Pisa falls to Florence in 1406 and Michelangelo completed David in 1502. 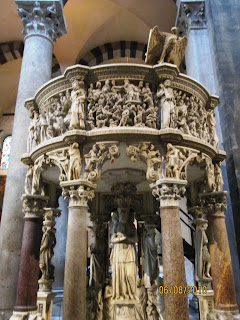 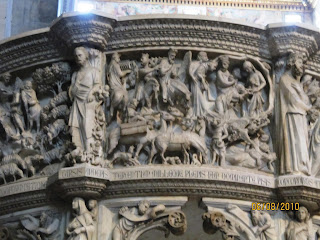 Finally, the Campo Santo, which contains earth from the Holy Land and a number of caved Sarcophagi. It was completed in 1278. There is a Moorish influence in the design of the buildings seen in the inlaid marble, and geometric patterns 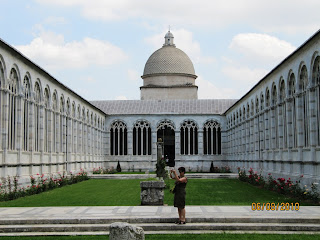 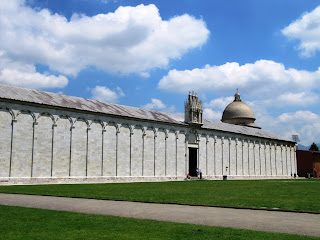 These photos are among hundreds taken during our visit, but too many to include here, but they represent the architectural beauty of this city, which remains one of Italy's most important destinations for tourists. We can understand why as you look at the various monuments built more than 700 years ago that continue to enthrall both young and old. It's a unique city and a must for anyone visiting Italy to see. The one drawback that we immediately noticed was the number of stands selling replicas of the Tower or other memorabilia, all with the eye shot of the these famous monuments.
Posted by AJ at 12:50 PM