This is the second half of the fabulous day we had on Sunday. First the Scampanata in Anghiari and then we drove to Gubbio. This was our second visit to this city, about an hour from the Villa, but it was a special day - the annual competition between Gubbio and San Sepolcro in the crossbow competition.


The use of the crossbow is believed to date back to the 5th century BC as a military weapon. In discussion with one of the shooters from San Sepolcro, the crossbow weighs between 15-18 kilos (33 to 39 lbs.) and for the games, the front (bow) is placed on a wood pedestal with the neck of the crossbow resting on the shooter's shoulder(a photo will show how it is used). To arm the crossbow the shooters use a crank to pull back on the elastic (my word) band, which is then hooked into a trigger piece. The arrow, about 12 inches long and shaped thinly on both ends and slightly fat through the middle, is placed in a slot with the feathers at the end of the shaft lying flat. Each arrow is identified with the shooters name or insignia to later identify the shooter closest to the center of the target. The arrow travels at about 90 kilometers per hour over a span of 30 meters. There were 42 shooters all trying to put their arrow into a circle approximately 4 inches in diameter. As the target became filled, some of the arrows would careen off of another arrow and fall to the ground.

Before and after the competition, there was a parade of "nobles" (representing the aristocrats of that day) dressed in period costumes with man and women walking together with the man's right hand on his heart and the other hand holding the right hand of the woman. 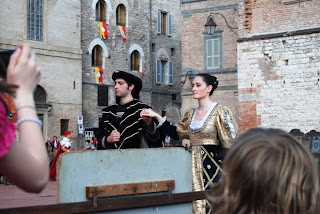 Following the nobles came the "Balastreri" (the shooters) also dressed in period costumes with silk stockings, one leg of one color and the other of another. 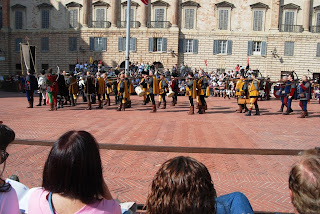 Following the shooters came the banner squad. They put on a wonderful display of banner twirling 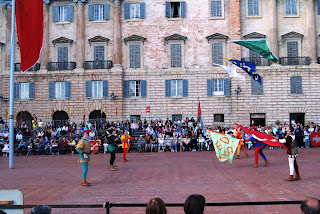 The exciting part was the shooting. The first arrow went to the left of the bull's eye, but still within the at 4 inch circle. As the competition continued, there were 4 shooters going at once (at their pace), but it seemed simultaneous. At the end, the officials put a band around all the arrows, removed the palio (target) from the wall, walk around the arena to show the spectators and then isolated themselves in a room to identify the winner. 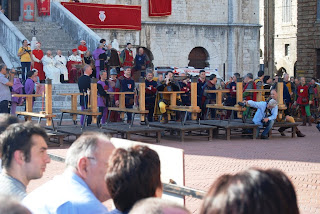 The winners all came from San Sepolcro - First, second and third. There was much joy. There was more banner twirling and the final procession out of the area.

It was a perfect day and very enjoyable. None of us had seen a crossbow competition before. Oh, by the way, if you're thinking of buying a crossbow, they cost upwards of 15,000 euros. Gubbio will have a chance to regain face in September when the second match occurs. Alas, we won't be here for it.
Posted by AJ at 2:39 PM