Yesterday (Sunday) was a "WOW" "WOW" "could it get any better than this" day. We left the house at 5:40 AM to witness an event in Anghiari that goes back more than 200 years, but the origin of this folkloric game goes back to Roman times where an individual is defiled with flour, paste (probably icing of horrible colors), and dead fish as he is carted through the narrow paths of this ancient city. This event takes place one every 5 years, so we're lucky that this was the year. Here's how it works. 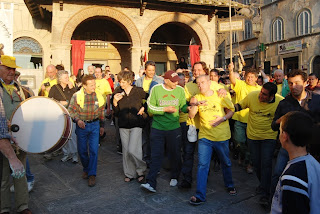 At the beginning of May, residents - those who want to participate - sign up and agree that throughout the month of May, they will faithfully arrive at the town square to sign in at 6 AM on Tuesday, Thursday and Sunday. The poor soul(s) who do not are literally dragged from their homes (allowing for some decency) and taken to the town square where they are placed on a cart for the ride through the town while a number of men smattering them with vile liquids of various colors.

The photos and certainly the movie will highlight the enthusiasm that the participants place in this event. We were struck by their excitement and the fun that manifests itself as they parade the tortured one through the narrow paths. Some games never end. 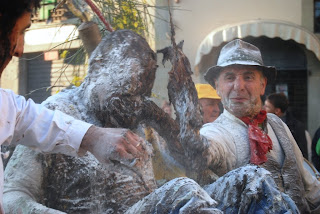 The Scampanata, as it is called, is local Anghiarian tradition that began more than two hundred years ago that is based on an ancient Roman custom that celebrates the spring and growing season. 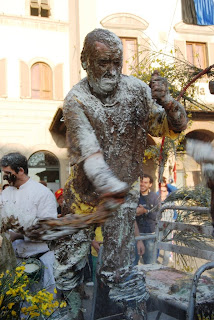 I have a wonderful video that highlights the condition of the unfortunate person who overslept. There were in fact 3 people who were paraded and showered with gook. I thought I could put the video on Youtube for all to see, but it's in a THM format and I can't get my computer to acknowledge it. Anyway, here are some still photos. 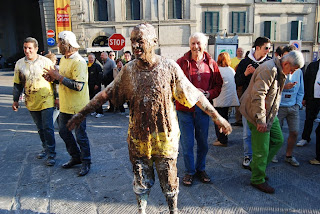 I can send more, but I think you get the idea. Yes, we had to get up at 5:30, but it was worth the fun watching this fun event. I followed the victim throughout the course and, by the time I got back to the starting point, I was covered with flour, but it was worth it. Well, we'll have to return in 5 years for another fun-packed day. 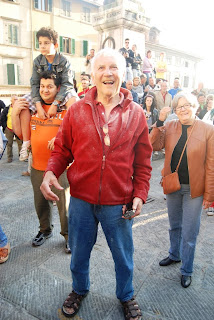 Are we having fun? Yes indeed.

Next the Crossbow pageant.
Posted by AJ at 12:43 PM