A Light Meal at Quattro Mori in Rome

We had arrived in Rome a few hours earlier from Tuscany via Ceri. We agreed we wanted a light dinner – preferably fish. The hotel concierge recommended the 4 Mori around the corner from the hotel. The restaurant has been in business since the early 50s and has a reputation for high quality food. There’s an anecdote about the restaurant. Pope John XXIII, the little maverick Pope with a twinkling smile who was responsible for Vatican II, which reformed the church, would leave the Vatican without his escorts and would wander about. One day he wandered into the 4 Mori restaurant. The restaurant soon became famous as Cardinals and other Popes have gone there.

We were both craving for fish, which was absent from our diet for the most part of our 10 weeks in Tuscany/Umbria. The restaurant was nearby. It was a hot evening, our first in Rome after leaving the villa, but the temperature inside the restaurant was comfortable and the décor pleasant and the waiters amusing. 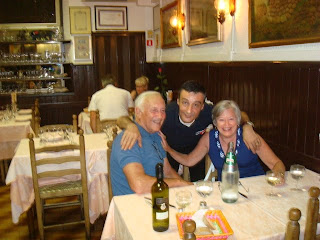 That's Gianni in the center
As we waited for our menus, the waiter, Gianni, came by to ask if we wanted fish or meat. In unison, we said “fish.” Moments later, water and wine appeared on the table. We said we just wanted a glass, but Gianni opened the bottle and said “Drink what you want!” Again, we waited for the menus, but none came. Instead, a waiter, a Bangladeshi, brought out six plates, each with fish on it and each different and each delicious. Wow, we thought, this is just what we wanted! They were small portions and each appealed to our need for a light meal. One was octopus, another sliced calamari. 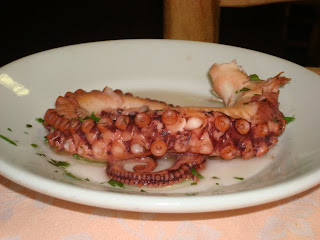 Octupus
The six plates were removed. Two more fish dishes appeared which included miniature octopi, about an inch long, again delicious. They were crisp and we’ve never experienced them before. We thought that this was certainly the end of our evening dinner, but no. Out came a risotto cooked in a scampi sauce with a touch of tomato to give it a pink color. It was to die for. Wow! We thought it was over; we were now getting beyond the vision of a light meal. But not the case: out came a plate of penne pasta also with a scampi sauce, perhaps the same sauce used for the risotto. It was great and we figured that this was now the end of the meal. We even suggested to Gianni that we could not possibly eat any more. He smiled. 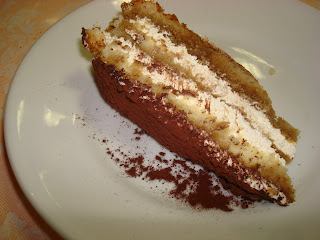 Another piece of fish
Shortly after removing the empty plates, out came two sorbets to cleanse our palates; we thought these were the desserts. Wrong again, out came a large platter consisting of prawns, calamari and other fish. Our efforts to stop the endless parade of dishes went unheeded. Another white fish appeared. We ate that too. Wow! It was finally over. What a fantastic “Light” meal! 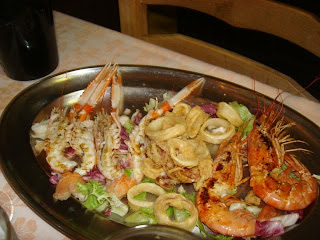 This was the plate with a variety of seafood. 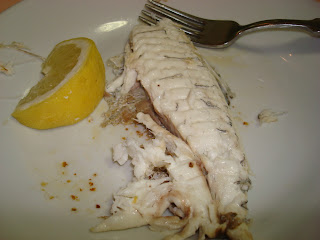 The final piece of fish
After our plates disappeared the Bangladeshi brought out a huge bowl of fresh fruit and, oh no, a tiramisu dessert. Finally, it’s over. Wrong again. Out came 3 bottles of booze, two grappas and one limoncello. 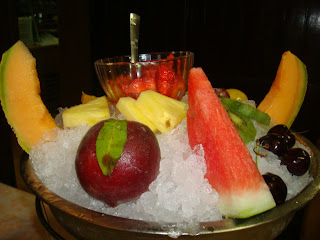 6 small plates of varied fish, including a large piece of octopus, some squid, sardines in an oil sauce and 3 others that we ate and had no idea what they were, but were tasty.

Then came the risotto and penne, now totaling 10,

Then came another fish, larger than all others – total: 13

What a fantastic re-introduction to Rome.

We wondered what this evening would cost; we imagined well over 100 euros, but were surprised when it came to 90 euros. Fabulous. It was the best LIGHT meal we’ve had in a long time.

We began dinner at 8 and left the restaurant at 1030, waddling our way back to the hotel and commenting, as we walked, that "we’ll have a light meal tomorrow."

If you’re ever in Rome and want a spectacularly great light meal, we urge you to go to the Quattro Mori located Via S. Maria alle Fornaci 8, and ask for Gianni. We established a good relationship with him; he has a crazy sense of humor with unusual eye and facial movements. We urge you also to starve yourself all day before going there. You’ll not be disappointed with the quality of food and great atmosphere.
Posted by AJ at 12:15 PM