When we visited Spello a number of years ago - it's about an hour's drive south of the Villa - and in our wanderings, we met a Franciscan brother who was pastor of the St. Andrea church. He noticed we were looking at a partially excavated wall and began to explain - in Italian - that when they opened the wall to expand the inside width of the church, they discovered a fresco. When he realized we were foreigners and Americans, he began to tell us about his brother in Philadelphia - all in Italian - and then showed us into his humble quarters - a bed, bare bulb light and a small desk cum chest. He then took us to his work room where he opened drawer after drawer filled with small jars all filled with flower petals. The colors varied and some were black. When asked about the petals, with a twinkle in his eye and smile on his face, said tin a whisper hat he would walk the neighborhood each night and "steal" the petals. Well, when we arrived on Friday morning, we inquired about the good Brother. We were told that Brother Paulo was now in a retirement home in Foligno. That was sad to hear, but delighted that he was still alive. The church has not changed much; the area in which they found the frescoes is now open and it's sort of a hallway between the outer and an inner wall.


At this time of year in Spello, all the residents are competing for the best looking floral area. Flowers abound in all places - as some of the photos will show - and on 5 and 6 June, there will be a contest on floral designs on the streets around the central area. 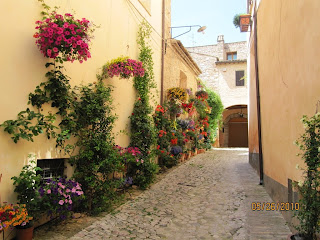 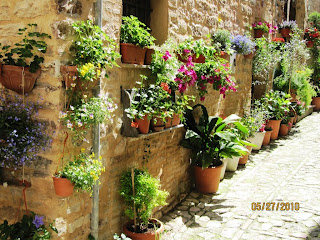 As we walked through the narrow streets, there were boxes - like grape boxes - at various locations, where people would put flower petals that will eventually be used in the floral displays. 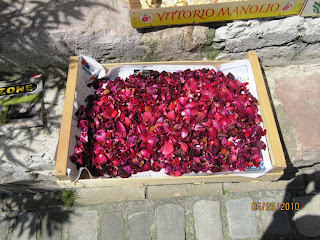 The most important documented history of Spello begins with its foundation by the Romans. Although history isn't always clear, but this may have taken place after the Perugian war in 41 B.C. Octavian (Caesar Augustas) seized the town, whose loyalty was to Anthony, and totally destroyed it. There was some rebuilding in the 4th century A.C, but then there were invasions by Attila in 450, by Totila in 546 and the destruction of the Longobards in 571. The Longobards conquered the town and became part of the Duchy of Spoleto (a nearby city). There were a series of ownerships after the Longobards, but you can find this on Google; the last fate that struck Spello was an earthquake in 1832, which had a serious affect on the town and economy.

There are about 8,000 people living in Spello, a town with many beautiful houses and narrow streets and alleys all of which have this wonderful motif of flower boxes and beds. See photos 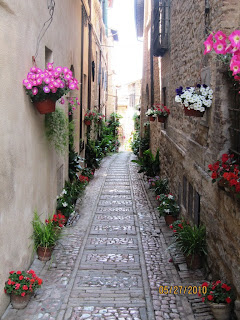 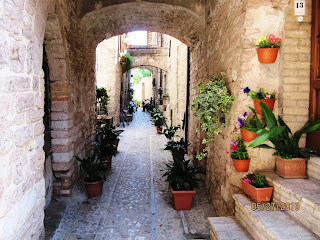 We lunched at the Cacciatore (Hunter) restaurant on a balcony overlooking a beautiful valley.


The photos will attest to the beauty of this city. There were very few tourists; we had the city to ourselves.