MONTONE is a medieval town squirreled away in the Umbrian hills, we call it a sleeper town because it is one of those towns that if someone does not lead you to it, you’re not likely to find it on your own. It is a town that you must visit. The opening lines of the booklet given to us by a Montonese resident, at the start of our walk into the city, begins this way: “Whenever one mentions Montone it is quite usual to be asked where it is and in many ways the fact that it remains undiscovered is one of the many reasons it is so very special.” 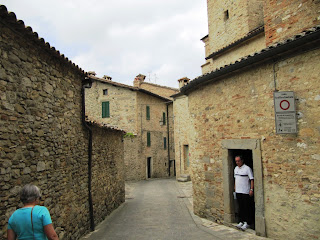 We believe it’s special. It is unspoiled by tourists; its location, is miles from the nearest major roadway and despite the signs that show it exists, there are few people who visit. Our language professor said it was worth visiting. It’s a picturesque town; had we not done so, we would have missed a beautiful part of this great Tuscany/Umbrian adventure. Those who follow us will immediately fall in love with the town and its people. The man, for example, who came out of his home to hand us the beautiful designed and written brochure on the history of Montone, demonstrated by his actions and voice how proud he was to invite guests to his town. Of course, for all we knew, he could have been the mayor. Then there was the man near the historic ruins of a fort who gave us some history of the town. He turned out to be an Albanian who arrived in Montone 15 years ago looking for work, found it and remained, raising a family of three.

An interesting sidebar: Children born to foreigners in Italy are not entitled to Italian citizenship. A child born to a foreigner and an Italian does become an Italian citizen, but is also eligible for dual citizenship. In the 90s, during the disturbances in Kosovo, many Kosovo nationals fled their country and some settled in Italy. About 140 arrived in Anghiari and our Italian language professor was asked to develop a program to teach them Italian and help them integrate into the local society. They did very well in establishing a good relationship with the local Anghiarians and participate in local activities, but they remain Kosovo citizens.

Montone is built on a hill overlooking where the Tiber and Carpina rivers meet. Montone means Aries or the Ram. It’s a small medieval town with a population of about 400, where the majority of residents are involved in farming. As the photos will show the streets are very narrow and also very steep. 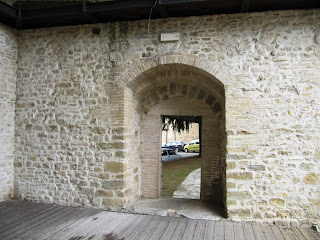 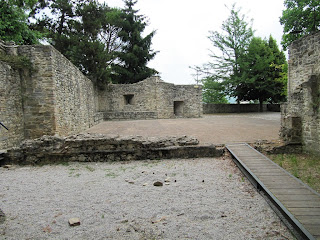 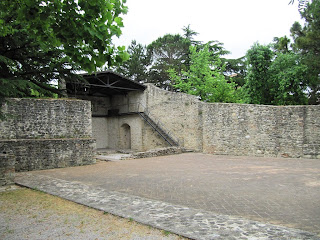 The earliest record of Montone goes back to the 10th century. Although under the control of Perugia, Montone had its own constitution and was governed by a group of elders. In the center of town there are the remains of Fortebraccio’s fortress, which Pope Sisto IV had destroyed in 1477, because Braccio, as he’s called here tried to establish an independent state at the time this area was governed by the Vatican as part of the Papal States. Montone’s history is linked to the Fortebracci family which reached its apex in the 15th century under Andrea Fortebracci known as Braccio, one of Italy’s first and best known man of arms. He was a declared enemy of the Pope, but Andrea has a special place in Italian medieval history because of his attempt to create an independent state in central Italy.


As the photos will attempt to show, as we wandered the narrow streets, we got the feeling that nothing has changed in 500 years, except for the cafes and restaurants at various locations – and the occasional car that went by – but the houses have not changed. While they might not have had glass, which was expensive, they likely had some form of shutter. 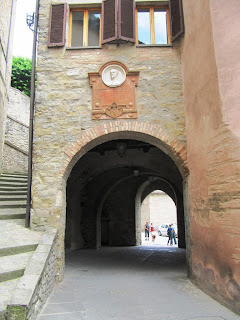 The town is spotless, the people pleasant.

There is a 13th century prison about the size of small den with a door way about ½ the size of a normal doorway, dirt floor and a small window above the door for light and air. Interestingly, there was a stone cannon ball probably left over from a period when cannons were used, but there was no evidence of any cannon. 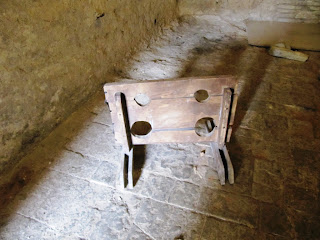 If you come to Tuscany, be sure to visit Montone; you won’t be disappointed. Be prepared for the hills.
Posted by AJ at 4:43 PM