We're tasting as many wines as possible before choosing a few that we'll settle on for our long-term stay here. As a result, we were decadent; we woke up at 9:30 and had breakfast/lunch at 12. Our breakfasts are typically European with cold cuts (salami, ham, mortadella, fresh ricotta cheese, mozzarella, Pecorino cheese, fruit (kiwis) and, of course, bread and coffee. One of our main issues is that the coffee pots are Italian - hour glass and small. In our wanderings in Arezzo, we looked for a 12-cup automatic coffee maker, but at 162 Euros ($207), we decided that the small pot, made twice, would work for us. That was a no-brainer decision.

Arezzo is 20 minutes by car from the villa, part highway and part driving through a lush countryside encouraged by the rains that preceded us. The forecast for this region for this week was supposed to be rain, but instead yesterday was a pleasant, sunny day. For those arriving by train from Rome, we now have the address etched into our GPS preventing any excuses that "we lost our way."

The days will certainly get warmer, but because we're near mountains, the evenings could be cooler than norm, so please bring sweaters and light jackets.

We fell in love with Arezzo. As Anghiari is smaller and lacked the richness as it was developing, Arezzo's wealth is notable in their buildings, roads and shops and, like Rome, there's a Via Cavour and a Via Corso Italia, both streets plentiful in small boutiques (where we priced the coffee maker). Yet, Arezzo has the charm and warmth of the smaller city of Anghiari. As the photos depict the streets are narrow and herein lies the splendor of Arezzo. Each turn we made as we strolled for 4 plus hours, we found ourselves awed by the structures, colors, narrow roads, architectural differences, restaurants, cafes, but all tastefully and subtly done. There was no ostentatious display of tourist paraphernalia; in fact, there were not many tourists. Many of the groups we saw were young Italian students, perhaps from other Italian regions, but perhaps from nearby schools. 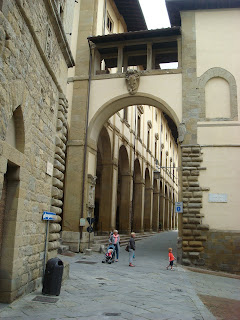 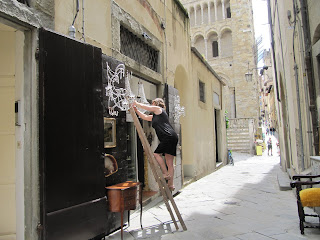 Arezzo's wealth derives from its thriving jewelry industry with the manufacturing of gold jewelry, that it supplies to many European dealers; we saw just a few stores in Arezzo selling gold jewelry and/or artifacts.

Arezzo's best pieces of art were frescoes painted by Piero della Francesca who, in the 15 century (1410-1492) produced some famous frescoes, many of which are in Arezzo's San Francisco church. Our guess is that few of you heard or read about Francesca who, unlike paintings by Botticelli, Da Vinci's "Mona Lisa," Donatello and others, whose paintings have reached foreign shores, Francesca's works of art principally frescoes and all of them in found in Italy. We were not allowed to use the camera inside the church so there are no photos of his frescoes, but you can find his masterpieces online. However, in the Church of San Francisco, Francesca's "Legend of the True Cross (1452-1460), which shows in various frescoes the cycle of how the cross was found near Jerusalem by Empress Helena. It also shows how Judas reveals the Cross, the death of Adam, The Queen of Sheba (white woman) recognizing the wood of the Cross, Constantine adopting the Cross as his battle emblem, Constantine dreams of the eve of the battle, the Annunciation and the wood of the Cross buried in a pit. The enjoyment of this visit to the church was our ability to get up close to the frescoes. We urge you to look up the church of San Francisco to see this remarkable beauty. We intend to return; there's more to see.


For dinner we returned to San Sepulcro's Centro Storico (historic area) to try out another restaurant. As usual, we were early so decided to try out some wines at a nearby winery - we rejected both - but we sat for 30 minutes tasting the hor d'oeuvres and finishing the generous amounts of wine in our glasses. We then went to the Ristorante Fiorentino, a place that we want to revisit again and again. When asked how old the place was, the response was "it was operating when Napoleon invaded Italy." The foundation of the restaurant goes back to the 6th century. Dinner began with a shared salad of radicchio, pear and arucula with balsamic vinegar and olive oil (of course). We also shared a pasta (extra wide noodles) covered with a delicious sauce made from boar meat topped with Parmesan cheese. Linda had the duck and I had veal with raisins and pine nuts. Both main dishes were excellent. We had panne cotta for dessert and coffee. Ah, yes, we had wine, a local "house wine," but one of the better ones we've had so far. Those visiting will have to try this place. By the way, the prices so far in this region are below that which we anticipated. We had coffee and a dessert in the morning and the bill was 3 euros - less than $5. Dinner has been running about $22-25 per person.
Posted by AJ at 10:24 AM